Even before sales of print editions of newspapers and magazines began to decline in favour of online reading, many publications moved their printing operations to industrial estates on the outer edges of cities. The prime example of this in Ireland of course is the Independent News Media building in Citywest, its glass and steel frame designed to make the enormous printing presses visible to the stream of cars heading for the motorway. This has meant that while many publications still have their editorial offices in city centres, such as at the Irish Independent’s building on Middle Abbey Street in Dublin, the physical processes of printing – the noisy and messy business of ink and paper – takes place largely out of sight and certainly out of earshot. 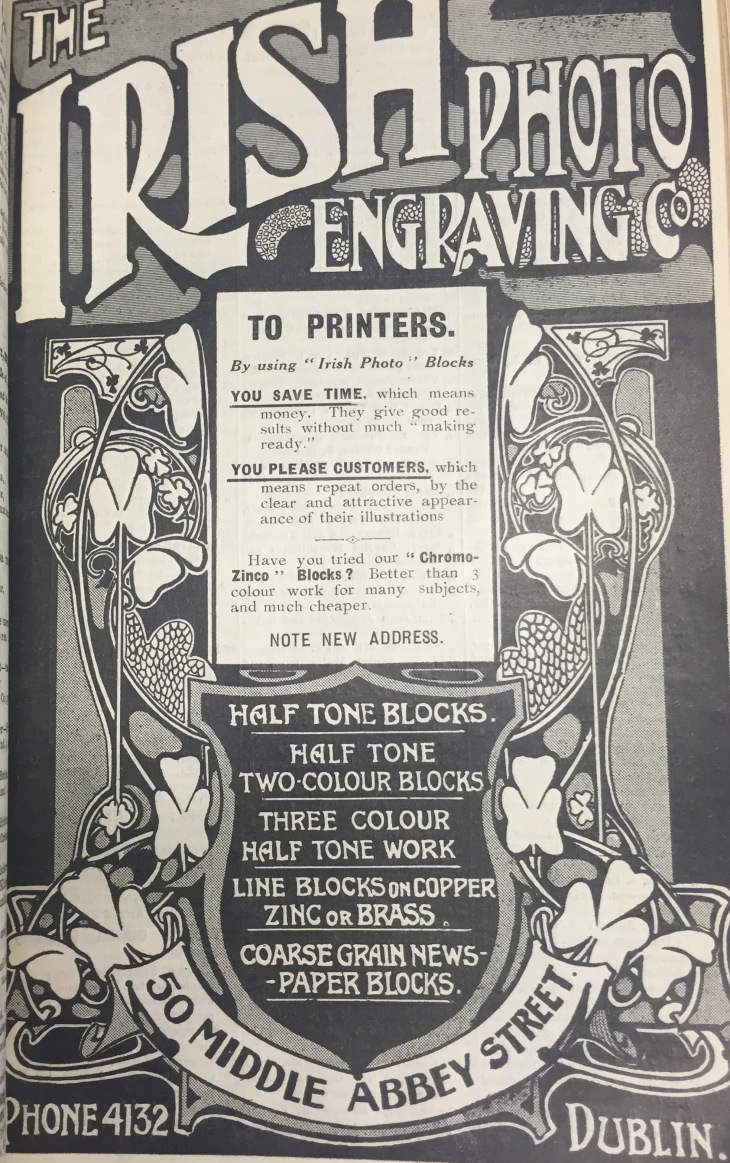 It is worth remembering however that this removal of the industrial aspects of newspapers and other printing from city centres is relatively recent – even I can remember waiting opposite what was then the Irish Times building on D’Olier Street for night buses in the small hours of the morning, and being able to see, through the semi-frosted windows on the ground floor, the presses running with that day’s first editions. For most of the twentieth century, there was little or no attempt to disguise the industrial quality of the mass media, with all of the major Dublin newspapers having their offices and printing works together in the same building, many of them in the city’s ‘press quarter’ around Abbey Street, Talbot Street and O’Connell Street. This was of course to prove a significant issue during the 1916 Rising, when not only did most of the national newspaper’s offices end up behind the barricades, but so did their printing presses. As the fighting continued, and the shelling and fires destroyed the area’s infrastructure of electricity, gas and telecommunications networks, this meant that none of the national papers could be printed for the entire duration of the Rising. Of the major national newspapers, for example, all of them produced issues on Monday 24 April 1916 – the day on which the GPO was seized. The Freeman’s Journal and the Irish Independent were then out of print for ten days, not reappearing until 5 May (although the Irish Times did print an issue on 2 May). In its first publication after the end of fighting, the Independent explained that, ‘We were in a position to produce newspapers all last week and this week except Friday and Saturday, when the Sinn Feiners were in possession of our Abbey Street premises, but early last week the terrible bombardment and fires completely cut off both the electric and gas supplies, and we were left without power to start our printing presses. The electric power was partially restored at 11.30am yesterday, and at noon our printing presses were turning out the “Irish Independent”’. Similarly, the Freeman’s Journal announced, ‘No Freeman’s Journal has been published since the issue of Easter Monday until today. The public are fully acquainted with the facts which caused the non-publication of the Freeman.   Our late premises in Prince’s Street, including all our machinery, were destroyed by fire during the Sinn Fein insurrection’.

When it wasn’t the site of a revolution, the area around the GPO was, for many decades, dominated by the actual, physical business of setting, printing, folding and bundling paper. This involved very many satellite yet essential businesses which revolved around the newspapers, periodicals and book publishers based in the area – typesetters, photo-engravers, ink suppliers and agencies handling photography and typing. In 1908 for example, Middle Abbey Street alone was home to the Dublin Printing and Lithography Company, the Rapid Printing Company, the Liffey Printing Ink and Chemical Company, the Abbey Print Works, and the Reliance Photo-Engraving Company, as well as the offices of the Evening Telegraph, the Freeman’s Journal, Thom’s Directory, the Irish Independent and the Evening Herald. It’s worth considering the impact this would have had upon everyday life in that area – the sights, noises and smells of industrial printing would have been commonplace in the streets around the GPO.

Perhaps the most influential of all these satellite businesses were the printers themselves. While publications as big as the Irish Times and the Freeman’s Journal had their own in-house printing facilities, smaller publications – including most magazines and periodicals – relied upon a contract with independent printers who would then oversee the typesetting, printing and physical distribution of each edition. This made printers extremely powerful players in the mass media industry – their bills were usually the largest expense of a smaller publication, and when magazines and periodicals went out of business, it was often because they could no longer afford to pay their printers’ bills. This was true of the Social Review (Annie Colles’ first venture in editing, discussed here), for example, and appears to have precipitated the chain of events which led to an acrimonious legal battle with her former partners. By contrast, one of the secrets to the initial and continued success of Ireland’s Own may well have been that its founder, John Walsh, had begun his career after inheriting not only the Wexford People newspaper, but more importantly the People Printing Works (also in Wexford) which printed his newspapers and also Ireland’s Own from its beginning in 1902. In a world in which all media, news and many popular leisure activities were still exclusively in print form, the actual business of printing was potentially a lucrative one. Most independent printers offered a wide array of services, from the large-scale contracts required to produce newspapers and magazines, to the small-scale but constant production of the enormous quantity of printed material circulating in everyday Irish life by the start of the 20th century. In 1900, for example, the Irish Figaro Printing Co. (which produced Annie and Ramsay Colles’ magazine of the same name) was advertising that it offered ‘all classes of commercial and artistic printing’ including ‘posters, handbills, circulars, programmes, memos, cards, bill-heads, note-heads, magazines, books pamphlets etc’, adding ‘nothing too large or small’. It is also worth recalling that printers could have cultural, as well as economic, power. It was after all a printer (in fact multiple printers) who on ‘moral’ grounds refused to set the type for ‘The Two Gallants’ in James Joyce’s Dubliners, and who later destroyed the sheets that had already been set (Joyce managed to rescue one set of them for its eventual future publication). Just as the various campaigns against ‘immoral’ literature knew to target newsagents and other distributors of material they disapproved of in order to stop its circulation, clearly they also realised that recruiting printers to their cause could prevent its very production.

It may well have been this determinative power over the very existence of many publications which meant that the dividing line between printers and publishers was sometimes quite blurred, as printers became full partners in publications, or even acted as publishers themselves. One of the most striking examples of this was evident in the career and businesses of Ernest Manico, one of the most successful printers in Dublin during the early twentieth century, and who owned or printed an astonishingly wide variety of publications. His offices were at 12 D’Olier Street (sandwiched between two advertising agencies and just around the corner from the Irish Times), and his printing works were a short distance away in Temple Bar. Not much is known about Manico himself – census information suggests that he was born in London in about 1855 and it’s not clear when or why he moved to Ireland, but by 1901 he was living with his Dublin-born wife (and their 3 children) in Howth, where they remained until at least the 1911 census. His printing and publishing businesses were already well-established by 1895 and remained at the same city centre addresses until some time after 1916, as shown by his compensations claims for minor damage to both premises during the Rising.

Many printers in Dublin had successful businesses, but what distinguished Manico was the extent to which he was both a printer and a publisher – and possibly a distribution agent as well. Like many other printers, he advertised general printing services, but in 1895 he was also listed in Thom’s Directory as the publisher of the Dublin Figaro (soon to bought by Ramsay Colles and renamed the Irish Figaro), the Irish Military Guide, and the society paper, Irish Society. More surprisingly, he was also listed as the editor of Irish Society – even if he did not do the day-to-day editorial work, this phrasing means that he was its proprietor. He was also the proprietor of Irish Bits, a miscellany and story paper (obviously modelling itself on the wildly successful English paper Tit-Bits), edited by prolific popular novelist James Murphy, which began publishing in 1896 and changed its name to Irish Truth in 1911, but was still published by Manico. In 1903 a new women’s magazine called the Lady’s Herald (of which sadly no trace appears to remain) was also being published from his D’Olier Street address, and by 1912 he also owned Irish Sporting Illustrated. Finally, in 1912 Manico bought the ailing story papers the Shamrock and the Irish Emerald, and merged them under the rather unimaginative name Shamrock and Irish Emerald, which continued until about 1919 when it eventually folded for good.

Manico’s business interests were therefore a very effective form of both vertical and horizontal integration – by owning particular publications as well as the print-works which produced them, he was able to profit at two stages of their publication, and by owning multiple titles (which ranged from sporting publications to story papers and women’s magazines) he was able to profit from the tastes of an exceptionally wide cross-section of the Irish reading public. And his ability to run so many titles successfully would have been considerably helped by their guaranteed access to his printing works. He may even have been a wholesale distribution agent for some imported English publications as well. In 1902, his high-society magazine Irish Society published an advertisement for subscriptions to Wide World magazine, which could be obtained for 6d a month via Manico’s D’Olier Street offices. Wide World was an English ‘true life’ story paper published by George Newnes – one of the great media barons of the period and owner of Tit-Bits, the Strand (which published Conan Doyle’s Sherlock Holmes stories) and Country Life magazine among many other titles. In December of the same year Irish Society was advertising Tit-Bits’ ‘Grand Double Christmas Number’ with the information that it was available from ‘Ernest Manico Ltd, D’Olier Street Dublin and all Irish newsagents’, and by 1904 it was advertising ‘Newnes’ Monster Penny Books’ series (which included such classics as Grimm’s Tales, Arabian Nights and Aesop’s Fables), which were also available directly from Manico’s firm. All of this strongly suggests that Manico had a specific contract to import and distribute titles from Newnes’ publishing empire – potentially an extremely profitable side-line for his printing and publishing business.

Manico appears to have been exceptionally successful and enterprising in leveraging his printing works to place his business at the heart of the Irish media industry, but on a smaller scale many other printers were doing something similar. As well as books, newspapers and periodicals, they also produced every conceivable form of printed material – every business’ letterhead stationery for example, or the increasingly fashionable and sophisticated Christmas cards produced by JJ Lalor on Talbot Street, and discussed here in a previous post. Printing presses – along with the industrial quantities of paper and ink they consumed – were the technology upon which all print culture depended, and the businesses which ran them were at the heart of the Irish mass media industry before the broadcast era.

Critical Media Literacy For Anyone

Come Here To Me!

A Thousand Days and Nights in...